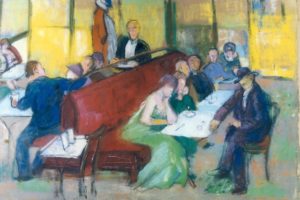 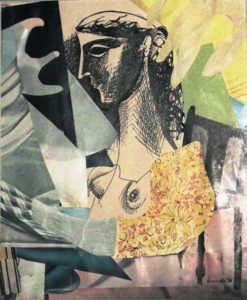 New York, NY – (February 26, 2018): Wild, hot, roaring, and free, the Jazz Age is immediately identified as the decadent heyday of such heroes as Zelda and Scott Fitzgerald, Ernest Hemingway, Josephine Baker, Gertrude Stein, e.e. cummings and other rebels who would “live it up to write it down” in New York, Paris and the Riviera. The giants among the painters were Picasso, Leger, Mondrian, Modigliani, Chagall, Lachaise, Maillol, Stuart Davis and Tamara de Lempicka. In the new exhibit, Anything Goes: The Jazz Age in Art, Music and Literature, opening at the Nassau County Museum of Art on March 24, 2018, there is one artist being featured whose name is less recognized, but whose art stands among the very best of the era: Anna Walinska.

Born in London and raised in New York City, Anna Walinksa’s life and art spans the century of American modernism, paralleling the history of the New York school and the American Jewish experience. A prolific painter, she created more than 2,000 works on canvas and paper over the course of her lifetime.

Walinska left New York at the age of 19 to study painting in Paris where she lived around the corner from Gertrude Stein, studied under André Lhote and spent time with Poulenc and Schoenberg at the literal center of the modernism movement. There, Walinska’s talent took root and she began to develop into a formidable painter through contact with the major artists of the age, including Picasso, whom she once sketched in a café.

“The life and work of Anna Walinska are the most thrilling epitome of the entire Americans in Paris phenomenon, an irresistible combination of pluck and beauty, talent and the hunger to learn, and that enviable ability to be in the right place at the right time,” notes Nassau County Art Museum Curator Charles A. Riley II, Ph.D. Riley is also the author of two books on this era, including Free as Gods: How the Jazz Age Reinvented Modernism, featuring more on Walinksa and her time in Paris. “I will never forget the revelation of seeing her Abstract Expressionist paintings for the first time, and that was my doorway to the even more fascinating Parisian years when she was right there, front row for the redefinition of Modernism in art.”

A full room of her work from this period – including the aforementioned Picasso, c.1928, a charcoal and watercolor artist portrait, Paris Café, 1929, a pastel on paper likely depicting La Coupoule, which Walinska was known to frequent, and several self-portraits – are at the center of this interactive show featuring the paintings, drawings, sculpture, fashion, first editions of monumental publications and musical that brings the Jazz Age vividly to life.

“My grandfather didn’t want his daughter sailing off to Paris. He wanted her to go to college, which was certainly forward-thinking in 1926,” explains Rosina Rubin, Walinska’s niece and the guardian of her impressive body of work. “But my aunt was determined to live her life as an artist, and knew that she had to go to Paris to study and experience the vitality and magic of that time and place.”

The exhibit will also feature later works from the 1950’s that showcase Walinska’s turn to abstraction.

Always a woman ahead of her time, Walinska traveled around the world in the 1950s, alone, in the era of prop planes – something unheard of at that time. Her diary of this six-month journey now resides in the Archives of American Art at the Smithsonian Institution. Works by Walinska are included in numerous public collections, most notably the National Portrait Gallery, the National Museum of Women in the Arts, the Smithsonian American Art Museum, the U.S. Holocaust Memorial Museum, the Denver Art Museum, The Jewish Museum, the Rose Art Museum at Brandeis University, the Johnson Museum at Cornell, the Zimmerli Museum at Rutgers, and Yad Vashem.

This engaging exhibition will fill the opulent rooms of the former Frick mansion on Long Island’s Gold Coast and be documented in a full-length catalogue published by the museum with essays by noted experts in the period and with each work illustrated and annotated. A full lecture and event series is under development to accompany the exhibit.

Nassau County Museum of Art is located at One Museum Drive in Roslyn Harbor. The museum is open Tuesday-Sunday, 11 a.m.-4:45 p.m. Admission is $12 for adults, $8 for seniors (62 and above) and $4 for students and children (4 to12). Docent-led tours of the exhibition are offered at 2 p.m. each day; tours of the mansion are offered each Saturday at 1 p.m.